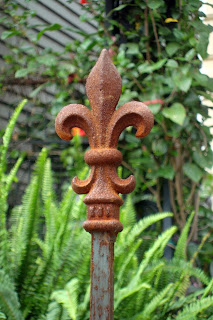 We have been to New Orleans and made a variety of Gulf Coast stops. Currently in Sarasota Florida,
we're visiting Chris's Mom Clare and friend Jim. The beach, a short walk from their Siesta Keys condo,
has been voted the best beach in Florida.

While you wait to hear about our adventures from the past few weeks, you may want to imagine yourself on the beach!

1. Place two cups of flour in a microwave-proof bowl.
2. "Zap" the flour for 30 seconds on high.
3. Place a large towel on your most comfy place to relax.
4. Lie on the towel with the bowl of flour next to you.
5. Slip your hand through the flour (the sand here is actually that soft) and do the following:
a. Close your eyes and envision turquoise blue water.
b. Imagine sounds of gentle waves crashing and seabirds crooning.......R..E..L..A..X....... 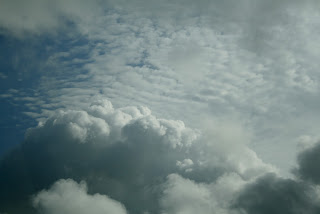 Posted by Caron and Chris at 07:53 No comments:

Git along lil' doggies...onward to Texas!

Pushed on east. The highway ran parallel to Mexico for awhile and we could see the sad jumble of colourful run-down shacks crowded on the hills. Entered Texas where everything has a star or a bull on it. Twas a long haul through the El Paso 'bypass' that crossed miles of sprawling metropolis. We made a lunch stop at the famous "La Posta de Mesilla", where top notch Mexican food has been served since 1939. The place was really "Olde Mexican-style" with amazing tile work, folk art wall paintings and live parrots caged in a huge ornate "prison" in the main lobby. 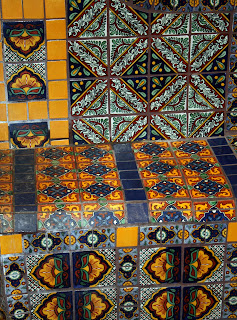 Although the day was overcast and often rainy, the wild flowers in spring bloom, added some spirit. Blue Bonnets, the state flower; resembles a lupin but they grow low, weaving swaths of cobalt and lavender between the grasses. Yellow and white Poppies, pink Phlox and orange Lantana complete the palette. Many shrubs are in blossom with yellow, white, pink and the amazing purple, grape-scented Mountain Laurel. Bees and butterflies hover about in abundant numbers.

We stayed at a Rest Stop on our first night in Texas. We parked and opened the sidewalk-side slides. We were among many
RV's and transport trucks. We had a private picnic table and Dixie had her own patch of grass. This spot was quite adequate for those who thrive on sleeping to the sound of traffic. 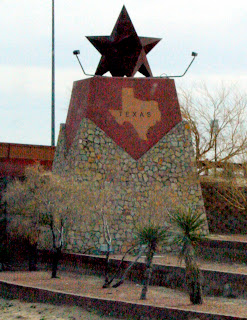 Needless to say, we were up early and on the road going
east once more. We drove many hours through rain and haze
and were rewarded when we checked in to﻿ "Summit Hill"
RV Park about half way between Austin and San Antonio.
We had a secluded spot near a pond and trees with birds
singing praises to spring. After dark, we could shine our
flashlight into the meadow and see ten or more pairs of eyes staring back. The deer are very plentiful here. (In fact, I counted twenty eight dead deer along the highway in one half hour: a fun travel game that you can play too!) At night, the spring peepers and other frogs croaked their little hearts out!


Next morning was very hot and humid as we drove south to San Antonio. There are beautiful natural rivers that run through downtown where historic and new hotels, restaurants and shops line "The Riverwalk".
Dixie enjoyed the stroll; people-watching, scaring ducks back into the river and sharing our lunch on a patio cafe. 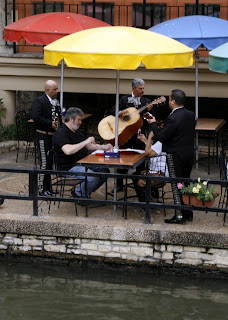 Dixie waited in the car while we toured "The Alamo". The buildings and grounds are free to the public. Some incredibly huge oak trees graced the lawns between the lovely gardens.
There are a few plaques outlining the historical relevance of the famous Alamo. The walls and walkways speak of the past.

The following day, we lined up for ninety minutes with a bunch of
food freaks. The Franklin Restaurant is famous for their Texas Bar B Que. Dining on brisket, ribs and cole slaw; we experienced the richness produced by hours of smoke and slow cooking that Texans love so much.

Continued into downtown Austin where we all enjoyed walking in the parks around Austin State Capital. Gorgeous architecture and vigorous sculptures of  numerous heroes including Davey Crockett.
Most fascinating, was the installation-in-progress of a large bronze bull being set into his place in the park.  Drove through the Soco district where funky food and
"far out" shops create a unique artsy community. You all come back now, hear? 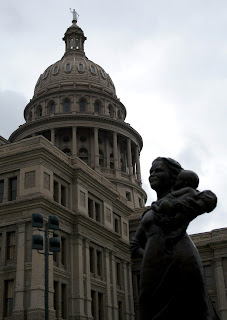 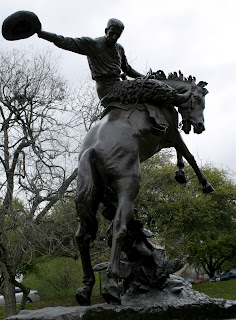 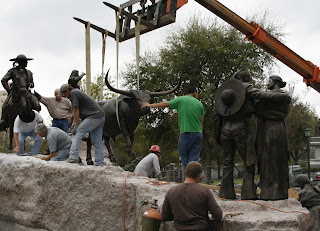 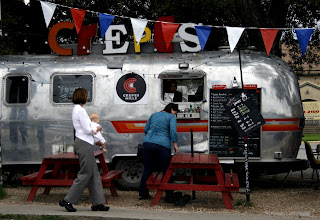 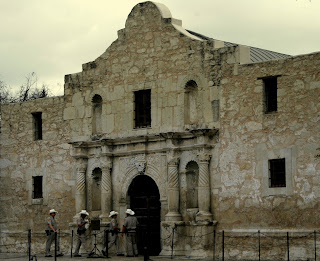 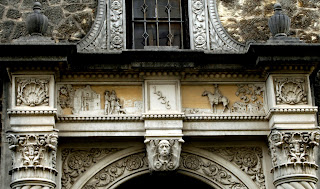 Posted by Caron and Chris at 13:54 No comments:

Weeze jus wundrin why we left dat der sunny desert is all?!

For those who care, six days after waiting for our bank cards that were promised in two days (or four max), we still have no cards. We found out that they hadn't been mailed yet as things were so backlogged! Do you think? A major bank decides to amalgamate and on a date mentioned in the on line mail (do you ever read yours?) puts a stop payment on all accounts and mails out new bank cards to all its customers. When folks call to find out what the _ _ _ _ is going on, they hear a recorded message bragging about how much the company does for their customers; HOWEVER there seems to be a higher than normal volume of calls (really?) and customers are thanked you for their patience while waiting fifty five minutes for the privilege of having a real person explain that you are up the creek! Ahhhhhhhhhhh,thanks for allowing me to vent!

Luckily, our camp site was sunny and quiet with the exception of Arizona's state bird the 'Desert Wren" whose rather obnoxious grating and repetitive call slices through silence like a Henkle through warm butter.

Lots of reading, hiking and relaxing. At local 'Fairbank Historic Townsite' we hiked through the shaggy ironwood trees and dusty grasslands. We saw the remains of a silver ore processing company; a decrepit graveyard and a few homestead remains with great rust, glass and old pottery chards left by the pioneers. Dixie had a break from the heat with a dip in the San Pedro River. Unfortunately, the shallow water only washed the dust off her legs and belly when we were hoping she'd lose a few more pounds of desert. The old town was a rather sad collection of shaggy post office, town school and metal shop.

Leap Year 'Marches' on! Drove east through grasslands dotted with cattle and yucca plants. Many dusty corrals, run-down ranches and mangy horses longing to be "put away wet". Parked CC inside 'Chirachua National Monument' and hiked along the grassy paths while Dixie nosed about in the wild flowers and sent three white tailed deer scampering towards the trees. Sadly, a huge forest fire rushed through the area one year ago and miles of blackened trees stand among the newly sprouted undergrowth. 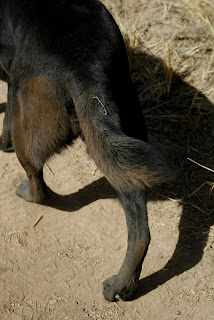 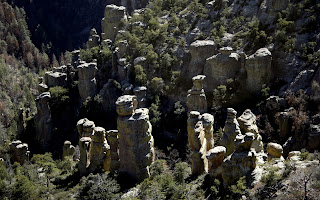 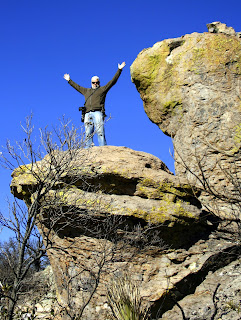 Unhooked the car and drove up the switchback curves past incredible rock formations; Organ Pipes Formation, Bonita Canyon, and Sugarloaf mountain to name a few. At the summit of Massai Point
we had an incredible view of the many "Balancing Rocks" and rows of rock pillars across the canyon.
The wind has sculpted the trees as well as the rocks and most of the sandy coloured boulders are covered with Fresca-green lichen. Hiking the trails here was as thrilling as exploring the Grand Canyon. We had hoped to boon dock outside the park but the parking area seemed sketchy so we drove up to the cowboy town, Willcox for an overnight in an RV park. 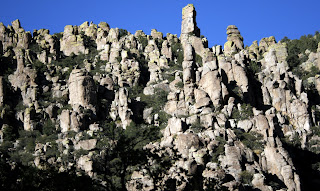 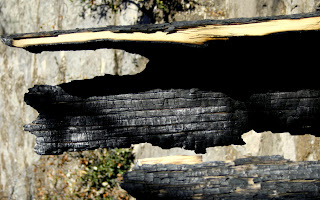 Saw flocks of hundreds of Sand hill Cranes over the cornfields. These birds migrate down to Arizona from western Canada for the winter. Happy Birthday to Chris! Drove east through crazy mountain roads and parked early in the Apache National Forest. We had the beautiful park under gorgeous Pines and Alligator Junipers to ourselves. At 5600 feet elevation, the temperature was very cold and we had to bundle up and huddle around the camp fire to stay comfortable. The low during the night was a remarkable -16 degrees Fahrenheit. Yikes! 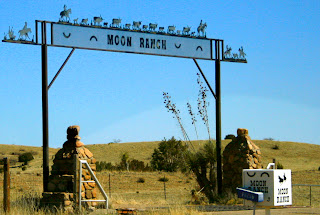 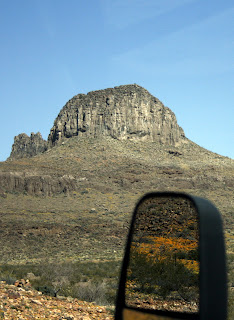 Spent the next day exploring the 'Gila Wilderness' in New Mexico. Beautiful rolling hills and forests
bordered the highway but we were unlucky in finding RV-friendly parks for the night. Set up camp at Rose Valley RV Ranch in Silver City. Really nice campsite with rustic branch-privacy fences, rusted artifacts such as an old tractor and some mining equipment, wagon wheels and weathered saddles. 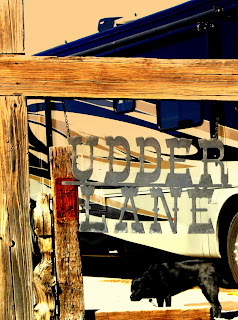 The following day, we found ourselves driving up more winding roads through forests and mountains, many with heavy snow in patches. Stopped by the Gila River to allow Dixie a paddle as she would not be allowed to join us on the next leg of our journey. A steep, rocky path lead us up to the amazing 'Gila Cliff Dwellings'.
Unlike most cave dwellings in the southwest, the Gila Caves can be entered by tourists. The ancient brick walls, fire pits and rooms for special rituals were created by the Mogollan Culture around 1270-1300.
The space was vast and rooms with a view were amazing. Some of the original wooden poles were still in place to hold up ceilings, now long gone. We climbed down a repro of a wooden adder that would have made all the caves and rooms accessible to the ancient community. It was a special experience. 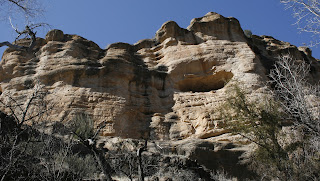 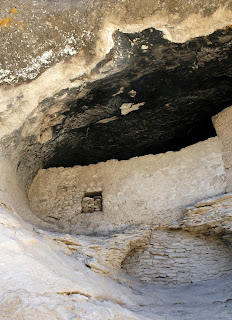 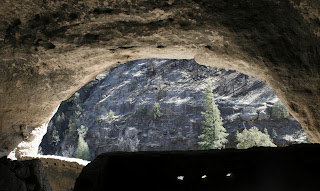 On the drive back to Silver City, we stopped at one of the numerous natural hot springs in New Mexico.
We felt the warm temperatures of the three small natural tubs that were decorated with some funky folk art.
The water's cleanliness was dubious and the owner wanted $4.00 per dip. No one could have paid us enough to don our bathing suits and slip into the dubious no matter how healing they may have been!
I just about jumped out of my skin when a family of seven Javelina crossed the road in front of us on our way back to camp! 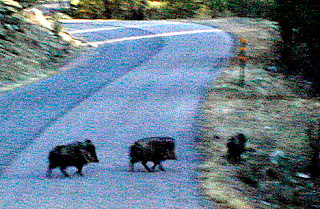 Posted by Caron and Chris at 17:35 No comments: