Out and About at The Great Outdoors RV Resort

We had a taste of Florida’s East Coast winter weather beginning with a couple of unseasonably hot days, followed by a thunder and rain storm and finishing with a few warm sunny days and cool evenings.  We were here for such a short time, most of our days were spent riding our bikes or walking around the huge park. 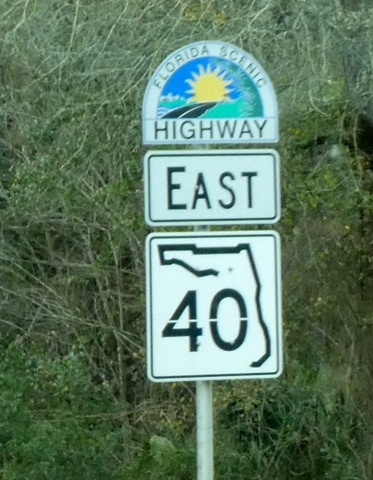 The unfortunate side of highways beside forests is the increased road kill, opossums, racoons and armadillo, birds of prey.

Yup, they had one of everything pretty much.

The State’s lack of helmet laws always astounds me, it’s 2019! 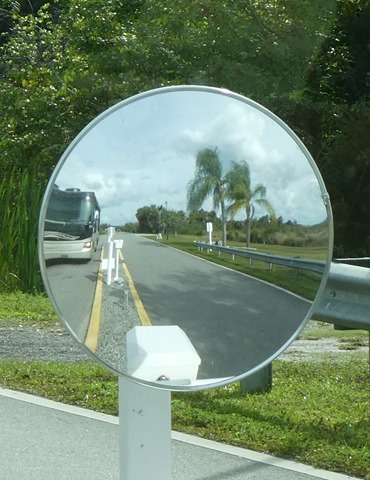 After checking in at The Great Outdoors RV Resort and setting up CC, we had a rest then ventured out to a seafood restaurant that a friend had recommended on his travel blog.  Dixie Crossroads was an iconic Florida place and we indulged in salad, fish of the day and three varieties of shrimp (White, Pink and Rock)  It was a fun place but we would rate the food as average.

Of course, we were smitten with the name.

Checked out the Bay near Titusville on the way home.  It’s called “The Space Coast” with Kennedy Space Centre directly across the water.        No launches while we are there. :(

Around The Great Outdoors RV Resort

The park is divided into a couple of sections of monster homes with garages for their RV’s;  a few medium sized lots for RV’s with multi purpose small buildings; many medium-sized or smaller houses for those who no longer travel with RV’s; a block of executive suites with RV ports for those with exquisite motorhomes plus a quaint section of vintage homes that have survived from the early days of the park’s development.  Many lots back on to ponds or small lakes, the golf course or natural wilderness areas. (Photos labelled CB are from Chris’s I-phone)

Many folks still had Christmas decorations up.

Most lots are beautifully landscaped and kept well manicured.

The neighbours were saying, “Hey we haven’t see Tony for a few days!?”

The many varieties of Palm Trees are outstanding throughout the park.

Here is our lot.  You can see how close the neighbours are.

Wild winds before the rains came.

In the park there is a gigantic clubhouse and theatre, golf course, three pools and spas, tennis court, fitness center, hobbies and activities center, library, church, nature center, nature trail, diner, restaurant, beauty salon and massage therapist.  Most residents own one or more golf carts which is the major form of transit in the park which makes things quite quiet.

There were plentiful displays and literature on all the natural aspects around the park and the beaches nearby.

This little guy was only a meter long.

The Park hosts many conferences and rallies.  There were a few posh Prevost Motorhomes and Vintage Buses camped for  a four day rally.

There were three huge Prevost Buses.

One afternoon, we drove over to Cocoa Beach where we enjoyed a fantastic fresh lunch and beverages at The KiKi TiKi Bar on The Pier.  We were entertained by beachgoers, paddle boarders, pelicans, a talented guitarist/vocalist and the sounds of rolling waves.  Walking on the beach, we dipped our toes in the surprisingly mild waters of the Atlantic, chatted with a few fishermen and watched the various antics of folks sunning, swimming, collecting shells and of course, taking selfies.

Many cruise ships in at the Cape Canaveral Wharf.

These colours are unaltered, it was a spectacular day!

Some Gulls have gone before.

How could we pass this place without stopping for a cone?

The Warbirds Museum, close to The Great Outdoors provided us with a great afternoon of touring numerous artefacts and planes.  One hangar features a range of aircraft from WWI to the present.  A second hangar features various facets of the Vietnam War and a third is a Renovation Shop where all the planes in the museum were restored and others are being repaired, painted and refurbished for future display.  Some of the aircraft continue to fly in local airshows.  There is a complete list of aircraft on display with dates and technical information on Wikipedia if you are a plane buff.

Lived at the bottom of Lake Michigan for 48 years.  The female pilot who went down in this training aircraft was recused. 50 or so years later she attended the ceremony when the restored plane was unveiled in the museum.

Original rusted engine from the above F 4-F Wildcat.  Another engine was installed during the restoration.

Replica of the 1907 Epps Monoplane.

Look out Snoopy, here comes the Red Baron in his Fokker F-1

Boeing B-52 Stratofortress (cockpit only)

Planes for big and little people.

We were tempted to steal this one for Finn, it was the perfect size!

Folks at The Great Outdoors are very friendly and busy, involved in numerous social or recreational programs in the park.  Kyle and Billy from Dan Walter Detailing spent a day washing, waxing polishing CC and our CRV.  They attacked all problem areas and put their hearts and lots of elbow grease into  creating amazing results!  We can throw out our mirrors and use the sides of CC, she is so shiny!  We highly recommend this professional and reliable company!

We enjoyed our stay here even though we prefer a more natural and less busy place.

Our next door neighbours were very friendly, in fact they were golden!  Their owners, also from Ontario, kindly told us about points of interest in and around the park.  They had been rear ended in a police chase on their way to the resort and with their insurance money, had decided to purchase a home in the park and say goodbye to their RVing days.

A fellow who previously owned the lot we were renting stopped for a chat with Chris.  He works now as one of the Courtesy Patrol Officers who drive through the resort keeping folks safe and often issuing speeding tickets, yes even to drivers of golf carts.  The speed limit is 15 MPH.  An added perk in the park is that no motorcycles are allowed, which helps keep things quiet.

He related a story about a day on our site where he had tied up his dog to the front fender of his Motorhome as usual and headed around the side to do a few chores.  He heard an unusual noise from the dog.  As he rounded the front of his coach he saw his pet shivering in fear as a fourteen foot alligator crawled by a few inches from the dog.  The gator ignored the pooch and neighbours who had gathered watched the scaly beast continue across the road, through another lot and eventually to slide into a small lake.  There are alligators throughout the park and people keep a constant watch out for them.